You Can Help Fight Fraudulent Activity

Every year, hundreds of billions of dollars are distributed in the form of federal grants to universities, local governments, organizations and individuals.

The vast majority of these funds are spent as intended, but misuse, deceit and abuse are nonetheless present. As a result, hundreds of thousand dollars go to waste.

Fraudulent behavior can take the form of embezzlement, theft, bribery or false claims and statements. Such violations of federal law are difficult to flag without the help of individuals inside the grant community.

Learn how you can help to stop fraudulent behavior and, thus, strengthen the integrity of the federal grant system and increase the overall efficiency of the government.

What is grant fraud?

Grant fraud typically occurs when award recipients attempt to deceive the government about their spending of award money. Such behavior amounts to "lying, cheating and stealing," according to the Department of Justice.

What is a grant scam?

The allure of so-called "free money" from the federal government has enabled scam artists to prey on people's hopes by promising access to grants – often for a fee. In reality, federal grants are rarely awarded to individuals seeking personal benefits, and applying for a grant is completely free.

What are the costs of grant fraud?

Besides triggering lost efficiency and waste in the government, grant fraud can also have a significant impact on entities found to have carried it out. The Department of Justice Office of the Inspector General warns that consequences can include "debarment from receiving future funding, administrative recoveries of funds, civil law suits and criminal prosecution."

Who is responsible for monitoring fraudulent behavior?

Federal Inspectors General (IG) within each government agency have been established as  independent and objective units tasked with combating waste, fraud, and abuse in their respective programs.

How can grant fraud be stopped?

Only with your help! The front line of defense against fraudulent behavior in the grant community includes accountants, auditors and other award recipient personnel.

You can also report grant-related scam attempts to the Health and Human Services (HHS) Fraud Hotline at 1-800-447-8477. 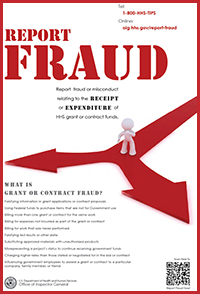